2019 Landmarks – The ‘firsts’ that spell change

When Europe’s first industrial 3D concrete printing factory opened in Holland in January it signalled a paradigm shift as the technology moved from novelty to mainstream application. The Eindhoven plant was set up by Dutch contractor BAM Infra and materials company Weber Beamix in collaboration with the Eindhoven University of Technology. It will produce large-scale 3D print construction components and an initial order book includes four bicycle bridges for the province of North Holland and a cluster of five printed concrete houses, earmarked for the city of Eindhoven.

Bas Huysmans, managing director of Weber Beamix, said the plant is an attempt to “break through the chicken-and-egg problem” and create the capacity needed to establish the technique: “The bicycle bridge that we have 3D printed in Germert was proof of principle. We have shown that it works, that this is possible.

More than half of construction companies in the UK and Ireland are now using drones to carry out digital/reality capture, according to a survey published by aerial inspection and surveying specialist ProDroneWorx in January.

The survey of 150 senior figures within the construction, infrastructure and asset inspection markets found that 52% used drones for digital/reality capture in 2018, compared to 33% in 2017.

The top three reasons for adopting the technology were improved data quality (56%), time saving (54%) and the reduction of risk (42%). However, more advanced outputs were underutilised.

Indications are the technology is not being exploited to its fullest potential, however. Almost three quarters (74%) of respondents said they use drone technology for photography and video, but fewer than 30% use the technology for value-added services such as aerial LiDAR, 3D point clouds, 3D modelling, digital surface/terrain models, orthophotos and thermal imaging.

The publication of the Hackitt Review into regulations and building safety, in May last year, gave BIM a huge lift in housing, a sector that has been slow to adopt digital processes. The review, which came in response to the Grenfell tragedy, said BIM should be mandated in the design, construction and operation of all new high rise residential buildings over 10 storeys and their refurbishments.

This would create a “golden thread of information” that runs throughout the building lifecycle, from design to construction and operation, helping transform current processes that make it difficult to identify who is responsible for making decisions and changes that can lead to unsafe buildings.

This year it was announced the government is looking to mandate the use of BIM on high-rise residential projects over 18m (six storeys or more) as part of a raft of tighter measures to improve safety in higher risk residential buildings.

Systems designed to automate the process of capturing and analysing construction progress moved a step forward in 2019.

Over the past few years we’ve heard much about Spot the robot dog, But in November San Francisco-based construction technology company HoloBuilder partnered with robotics company Boston Dynamics to unveil SpotWalk, a new product that integrates with Boston’s canine robot. The SpotWalk app enables the robo-dog to walk job sites autonomously, capturing 360 degree images that record the progress of construction work to create a living digital record that can be used for quality and accuracy control. HoloBuilder’s machine learning engine, SiteAI, analyses images captured by SpotWalk to create further insights into progress.

But we may not need high tech automation to capture construction data for analysis. A system developed by another San Francisco-based firm, OpenSpace, uses a standard 360-degree camera attached to a hardhat to passively record images as a builder walks the site carrying out their duties.

The photos are uploaded to the cloud, where algorithms automatically map them to project plans and “stitch” them together to create an accurate visual representation of the site without any human intervention The data accumulates over time to give construction professionals the ability to review site conditions over previous days, weeks or months.

Concerns that emerging technologies like robotics and AI could spell doom for employment in construction maybe ill-founded, BIM+ reported in May.

A survey of 800 sector employers, by industry skills body the Engineering Construction Industry Training Board, found that twice as many believe new and emerging technologies, such as automation and AI, will grow the workforce grow over the next three years, compared to those who think it will shrink (20% versus 9%). 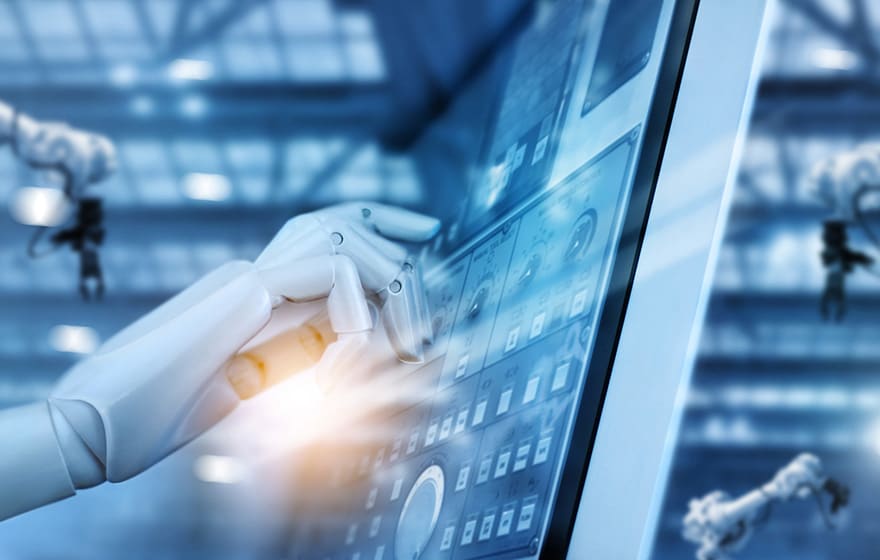 The positive viewpoint was supported by Neil Thompson, expert on robotics at SNC Lavalin Atkins, in comments made during a panel session at the Digital Construction Summit the same month.

The consultant’s digital construction director said the use of robotics in construction is set to increase, thanks to falling prices of hardware and the relative ease with which machines can be programmed, but he does not expect it to replace skilled people.

He said: “Instead of thinking about robotics being an industrial process to displace people, we should look at it in terms of the natural progression from the screwdriver to the power drill to the cobot arm, which augment the capabilities of skilled labour.”

The long touted modular sector could finally be set for large-scale uptake in markets worldwide, according to research published by McKinsey & Co published in June.

The report, Modular construction: From projects to products, points to “strong signs of what could be a genuine broad-scale disruption in the making” in a sector that is “already drawing in new competitors”.

Major new investors in offsite technology include SoftBank, Google’s parent company Alphabet, and Amazon, which have invested in prefab home developments and builders such as Katerra, RAD Urban and Factory OS. The report claims modular could give the construction industry the “productivity boost it needs”, along with US$22bn in annual savings in the US and Europe combined. The relative scarcity and cost of labour are cited as the biggest predictors of where modular construction is likely to gain traction globally, as already demonstrated in Japan and Scandinavia.

Other news in 2019 seemed to support this claim. BIM+ reported in July that software giant Autodesk and the bank, Citi, had invested undisclosed amounts in a volumetric modular construction start-up FactoryOS to address a growing affordable housing crisis and to help transform the construction industry.

In the UK, plans are underway to build a modular home factory capable of producing 2,000 homes a year at Ellesmere Port in Cheshire. The 4,650 sq m factory is the result of a partnership between modular builder Project Etopia and panellised construction firm 4wall and will be able to generate five three-bed homes a day.

October saw the launch of the UK BIM Framework, an ambitious roadmap to implement international BIM standards in the UK, including integration with BS EN ISO 19650, the international version of the Level 2 BIM model.

It is being developed by the UK BIM Alliance, BSI and the Centre for Digital Built Britain and the new website https://ukbimframework.org outlines their planned approach, including the latest British Standards and Guidance.

The UK BIM Framework is considered critical to the creation of a National Digital Twin, an interconnected ecosystem of twins for UK infrastructure assets, including schools, hospitals, utilities, roads and rail.

This web-enabled community for early adopters, suppliers and creators of twins, is exploring how CDBB’s Gemini Principles, that  set out a high-level picture of a National Digital Twin, should be implemented in reality. BSI was appointed Hub Facilitator for the DT Hub and will create curate the online and offline content generated by the community.

Future developments in AI will be pioneered inside the world’s first graduate level research-based AI university, opened in Abu Dhabi in October. The Mohamed bin Zayed University of Artificial Intelligence (MBZUAI) will give students and faculty access to advanced AI systems to unleash its potential for economic and societal development. It will offer Master of Science (MSc) and PhD level programmes in Machine Learning, Computer Vision, and Natural Language Processing, also engaging policymakers and businesses to ensure real life relevance and application.

The UAE made AI a strategic national priority in 2017, announcing a clear roadmap for an AI-driven future through the UAE’s Strategy for Artificial Intelligence 2031, and the appointment of the world’s first minister of state for artificial intelligence. Experts have estimated that, by 2030, AI’s contribution to the UAE’s GDP will rise to nearly 14% – the largest GDP share in the Middle East.

BIM+ reported in November on the beta launch of the first ever free digital tool able to analyse supply chain-specific embodied carbon data.

It is the first to translate all EPDs into a digital form to view and analyse data, rather than having to use PDFs. In trials, it enabled Skanska USA to reduce the carbon costs of designs by up to 30%, in most cases without increasing construction costs. Another software platform we reported on in November, aims to bridge the thermal “performance gap” between the design and construction of new buildings.

VeriTherm was developed by Cambridge Consultants and the Redbarn Group, it compares the actual performance of an asset, prior to occupation, against the designed performance. If the designed thermal properties of the building are not met, further investigation can look for specific causes and remedies.

The ability to verify that new buildings perform as specified could have a major impact on UK climate targets. A recent Innovate UK study found that average total carbon emissions for new build homes were 2.6 times higher than the design estimate and no homes in the study designed to “zero carbon” achieved it in practice.

The world’s first deep-learning system designed to visually detect maintenance and operational issues in bridges and tunnels was launched by New York and Tel Aviv-based start-up Dynamic Infrastructure in October.

The proprietary cloud-based technology compares archived images from smartphones, drones and laser scanning with live 3D views of the assets and automatically alerts when defects and anomalies are detected before the issues evolve into large-scale failures.

Diagnostics can be accessed via a browser and instantly shared with peers and contractors to streamline maintenance workflows. Dynamic Infrastructure already helps clients in the US and Europe operate around 30,000 assets.

Saar Dickman, co-founder and CEO of the company said: “We provide actionable monitoring and alerts that can better manage expenditures and help prevent the next collapse. We are bringing the data revolution to the decision-making process of bridges and tunnel maintenance based on our cutting-edge imagery analysis.”