According to Jan Mischke, senior fellow at McKinsey & Company, the gap in productivity between average economy and construction is up to $1.6trn a year. This is a shocking statistic which highlights the challenges that global construction is currently battling against. These challenges were discussed in the course of the European ConTech Summit earlier this year in London, co-hosted by GenieBelt. Anastasios Koutsogiannis reports.

“The opportunity for the building sector just from moving to economy average is more than $1.6trn a year. That’s half the global annual infrastructure spending. Just by doing things better, not hiring a single additional person we could build half of the world’s infrastructure,” said Mischke.

The good news is that the industry is at the verge of a fundamental change. On a global level a strong sense of urgency has started to become apparent. But as Mischke suggests, such a strategic shift takes time.

“There is this change as we speak. I don’t think that anyone can predict, or at least I can’t predict, whether it’s going to be changing over the next three years or over the next 30 years. But construction is changing. Digital is one of the biggest drivers of that change and also one of the big necessities and opportunities for the industry.”

Another interesting element is the diversity of the global building sector. In simple words, the productivity growth and level seems to vary depending on the subsector of construction that you are focusing on.

For instance, Mischke notices that the oil and gas sectors are performing better in terms of productivity due to their consistent push for attracting the best engineers and standardising various phases of the process. To the contrary, fragmented smaller trades, such as subcontractors and plumbers, are often facing negative productivity levels.

What is behind the productivity struggle?

McKinsey & Co recently carried out an in-depth research to analyse how the companies at the frontline perform and what the industry dynamics are that drive their behavior.

As reported by Mischke, the main reasons for the productivity difficulties in construction can be summarised as the following:

External forces Starting from the potential external forces which could affect the industry’s performance, the increased site and project complexity appear to be the primary factors. It’s worth mentioning that 21% of the total global spending in construction is for projects above $1bn. These are projects of global scale which, according to the statistics, end up with worse productivity performance than small projects.

Mistrust and litigious culture Mistrust, litigious culture and tendering scenarios full of claims are common phenomena in the building sector. The need for a more collaborative and innovative approach is stronger than ever. 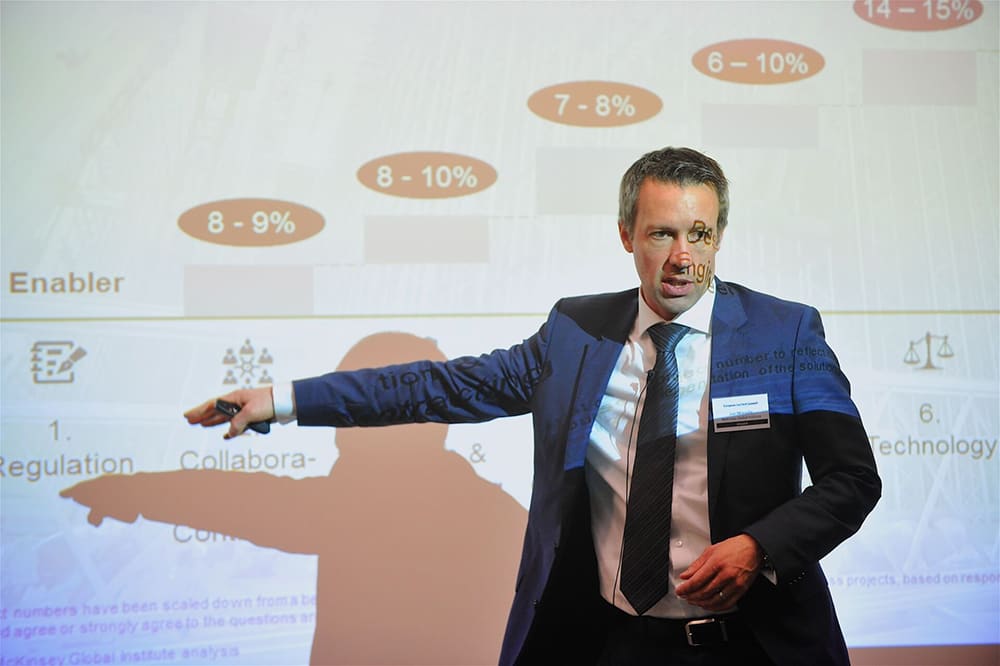 For Mischke, these are some of the most critical issues that affect productivity in construction which, in combination with the lack of digitisation and the general lack of investment, makes the current problem even greater.

How to fight low productivity

Despite its serious flaws both in terms of structure and culture, the building sector still has many reasons to be optimistic. More specifically, based on McKinsey & Co’s bottom up assessment of, there are seven crucial levers of change for construction:

Regulation Actions involve speeding up permitting processes, harmonising building codes and in many cases also mandating technology. The mandatory use of BIM in the UK is a representative example.

Collaboration and contracting The industry needs to move further from the current hostile environment that is part of many building projects. Contractors and owners should work together to optimise projects. Best value should be prioritised over lower cost. In other words, we need to go a step further and embrace integrated project delivery.

Repurpose design and engineering processes In many cases, this is just about investing more in the process. For instance, as Mischke suggested: “Instead of investing 3% in the process invest 8% or 10%. This will make a significant difference. It will pay off.”

In addition, the industry needs to find a way to optimise the whole process across the entire chain. Simply put, the institutionalisation of value engineering into the design process should be a priority.

Optimise supply chain management About 50% of the cost in construction is in materials. That’s why procurement centralisation and standardisation of the supply chain workflow can truly raise productivity.

On-site execution There is a strong need for scheduling work on site in a more efficient manner. There are many different disciplines that need to be carefully planned and coordinated. Workforce deployment and standardisation of certain tasks on site can help. It goes also without saying that the use of digital tools is anticipated to speed up on-site execution in the future and establish a more integrated building process.

Building capability Focus on workforce training is also something that can transform the industry. The advent of new digital tools and equipment on site has created a strong need for the industry to invest in training and reskilling the workers on-site. This would be a solid step towards increasing productivity in the sector.

Digital technologies Technology investments could have an impact of 14-15% on the sector’s productivity. And that’s not all. This productivity growth could result in cost savings of 4-6%, as shown in the diagram below. Construction is the least digitised sector even after agriculture. It is understandable, then, that the potential from the implementation of digital technologies can be huge. 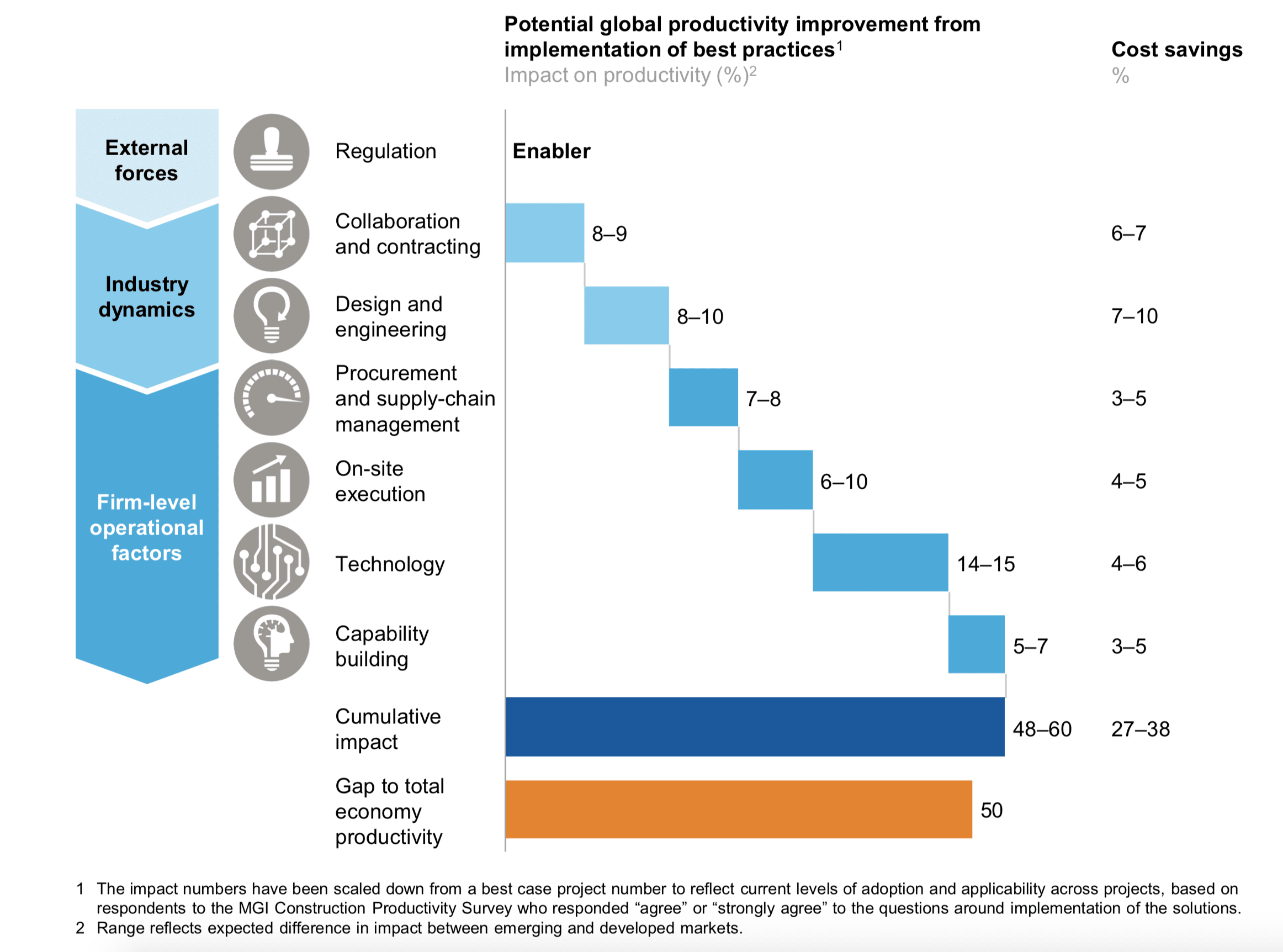 Why technology is construction’s best friend

We mentioned earlier that the building industry is at the verge of a fundamental change. Digital technologies are already playing a huge role in that and should be seen as the strongest ally that the sector has right now.

During his talk at the European ConTech Summit, Mischke described the main ways in which technology can revolutionise construction:

Computer vision The use of drones and robots can allow for nearly perfect site surveying through the collection and process of valuable project data. Project agents and stakeholders can obtain a full picture of the progress that is made and of the challenges that workers might face on site. Many costly and time-consuming conflicts can be eventually avoided thanks to effective site surveying.

In addition, the creation of a building’s digital twin could add great precision during the building process and easily point out any deviations from the original plan. On top of that, digital twins can provide valuable feedback for future similar projects (eg. precision on the type of materials needed on site).

Next generation BIM Many construction companies are attempting now to dissect their organisations into the traditional part and the digital part where they try to work on the entire BIM chain. Elements such as 5D BIM could provide the industry with increased transparency when it comes to design, progress visualisation and costing. It is apparent, in other words, that BIM can contribute to the building process on many different levels.

Digital project collaboration and mobility The use of construction management mobile apps are an excellent example. The effortless and straightforward connection of the numerous project sides will lead to improved progress-tracking and real-time collaboration. Both elements can accelerate the construction process and empower the connection between the site and the office.

IoT and advanced analytics The ability to analyse in depth all the data acquired from a construction site can be powerful. It can help you to detect what the points that need to be optimised during the building process. On-site material monitoring, equipment and labor productivity are only a few of the areas where IoT and advanced analytics could be extremely helpful.

Innovative materials, techniques and equipment The development of lightweight materials and new innovative building techniques can boost modular construction. Offsite construction can accelerate the construction process and decrease cost. Furthermore, the use of robotics on large scale repetitive site tasks (eg. bricklaying) can speed up construction projects and increase safety on site.

So far, there has been a lot of discussion about the issues the construction industry is battling against and its strong resistance towards change. But this doesn’t mean that the building sector isn’t going to change.

Mischke is convinced that the industry will eventually change and there are many reasons which allow us to be optimistic about construction’s future:

New disruptive players are anticipated to enter the market on a global level. Increased transparency in the global market is also regarded as a decisive factor according to McKinsey & Co.

The advent of disruptive technologies will continue at a fast pace. As a result, project processes and methodologies will change dramatically in the upcoming years.

Digital marketplace players can put some pressure on suppliers but also either make the life of contractors easier or more complicated.

All in all, it is evident that the construction industry has a lot of work ahead and that productivity is really hurting the sector. Nonetheless, as Mischke suggested during his talk, digital technologies and brave investments can make this fundamental change for construction happen.

Story for BIM+? Get in touch via email: [email protected]k