Simultaneous localisation and mapping – SLAM for short – how does it work, and what does it mean for mobile 3D mapping? Jennifer Lindsie Bristow, sales development team lead at NavVis, provides some answers.

SLAM is not a specific software application, or even one single algorithm: SLAM is a broad term for a technological process, developed in the 1980s that enabled robots to navigate autonomously through new environments without a map.

As a result of this never-ending circle of dependencies, SLAM was sometimes called a “chicken or egg” problem.

How does SLAM work?

There are many approaches to SLAM, but we can still make some generalisations to demonstrate the basic idea.

Here’s a simple explanation: when the robot starts up, the SLAM technology fuses data from the robot’s on-board sensors, and then processes it using computer vision algorithms to “recognise” features in the surrounding environment. This enables the SLAM to build a rough map, as well as make an initial estimate of the robot’s position.

By repeating these steps continuously, the SLAM tracks the robot’s path as it moves through the asset. At the same time, it builds a detailed map.

The best mobile mappers use the combination of lidar and RGB cameras to capture a densely coloured, photorealistic 3D data set of the building. – Jennifer Lindsie Bristow, NavVis

You can think of mobile mapping systems as laser scanners designed to offer the best possible building documentation workflows.

Mobile mapping systems use a combination of highly calibrated sensors and SLAM technology optimised for mapping. These tools enable you to capture 3D point clouds and panoramic images as you walk. They offer fast, comprehensive documentation for large assets and complex environments.

These devices are not to be confused with another kind of mobile mapping system, however, which mounts on top of a vehicle for large, outdoor capture projects.

What does SLAM do in mobile mapping?

SLAM is the “secret sauce” that enables the system to work without a tripod.

The SLAM technology fuses data from the sensors on the mobile mapping system to track your location as you walk through the asset. You can think of each position on this trajectory as a “virtual tripod,” which the software uses during the processing stage to ensure that each point in the point cloud is in the correct place.

By enabling the development of mobile mapping technology, SLAM has helped us take the logical next step in building documentation technology.

For a long time, building documentation work was performed manually, with devices like theodolites or tape measures. The 1980s saw the first total stations, which capture points much faster and with extremely high precision. In the 2000s, terrestrial laser scanners (TLS) came along and brought the documentation workflow to the next level by capturing millions of points instead of only one at a time.

In 2015, the first mobile mapping systems using SLAM appeared. They offered another step forward: they can capture millions of points while the operator moves, so they are no longer confined to a dedicated position like a TLS is. As a major bonus, they also include RGB cameras that capture 360° photography with no extra effort.

A TLS workflow can require setting up your scanner dozens of times for a single project (maybe hundreds, if the asset is particularly large). Mobile mapping eliminates this step, speeding up the workflow significantly. In typical projects, we’ve seen a speed increase of 10 times or more.

Since a TLS captures only a small area at a time, you’ll need to connect the scans to produce a final point cloud. You can accomplish this by overlapping your scans, which slows you down as it limits the distance you can move the TLS to the next station. Or, you can use survey targets, which is complex and increases the time spent on site.

A mobile device scans continuously – in some cases capturing up to 3,000 sq m – before you need to start another scan. This means less work to ensure full coverage.

Since any laser scanner can capture only what’s in its line of sight, a TLS requires that you move the device to a new setup if you want to scan past an obstruction and avoid blank spots in your data. A mobile device enables you to walk around an obstruction, fill in your capture, and be on your way.

The best mobile mappers use the combination of lidar and RGB cameras to capture a densely coloured, photorealistic 3D data set of the building. These walkthroughs are intuitive to navigate, explore, and measure, even for stakeholders who are totally unfamiliar with point clouds.

Leading mobile mappers with a tablet display will show you the quality of your capture as you work, offering real-time feedback on your scan. Miss a spot? The screen will show you, so you can immediately make a correction.

To illustrate the benefits of SLAM and mobile mapping systems, let’s look at how it performs compared to a TLS while documenting a typical office environment. 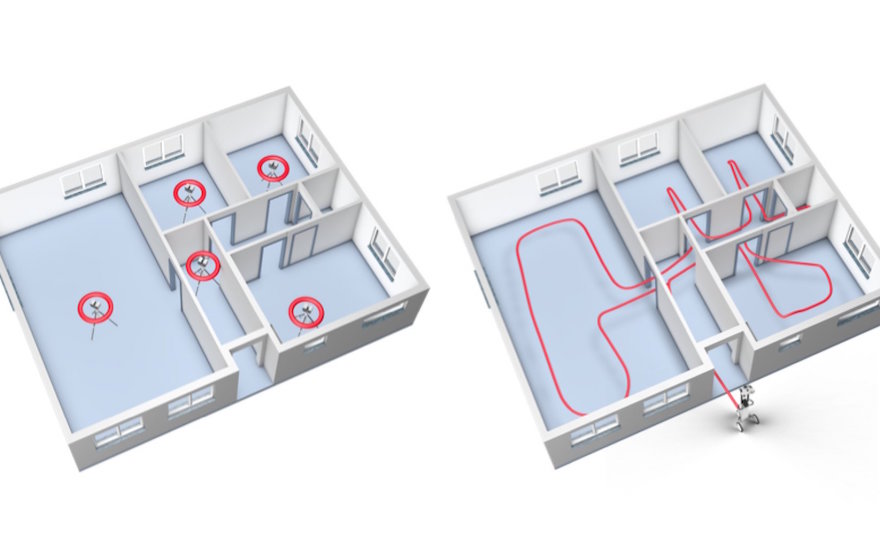 Above is an illustration of the setups you’d need to capture this complex space using TLS and target-based registration. Add extra setups in each of the doorframes for cloud-to-cloud registration (unless you want to spend the time to set up targets). Add extra setups if there are furnishings obstructing your scanner’s view, and even more setups if you wanted to capture the fine details of features like window frames.

At the fastest, you could scan this space in about 20 minutes with a TLS, but given the extra factors we listed above, you can see how it would likely take more than that.

Using a mobile mapping workflow, you could ditch the tripod, and just walk through the space as necessary to capture. You can move fast and be sure that you’ve got everything you need.

To find out more about SLAM, visit: https://www.navvis.com/technology/slam