The first ever development of Active Homes that are able to generate, store and release solar heat and electricity, is under construction in south Wales.

The 16 social homes (eight apartments and eight houses), on the site of a former care home in Neath, are designed as mini power stations able to generate around 80% of the energy they consume and slash tenants’ energy bills by at least 50%.

Active Homes are based around a thermally efficient and airtight structure of prefabricated structural insulated panels (SIPs) designed to reduce heat loss to a fraction of that from a typical home. Energy is generated in two different ways: using a solar wall for heat; and solar photovoltaics on the roof for electricity.

The solar PV, supplied by tech start-up BIPV Co, comprises a lightweight steel standing seam roof laminated with 2mm thin film solar panels. Energy is either used directly to power appliances, heating and hot water systems, or stored for later use in a 13.5kWh Tesla Powerwall battery housed in a brick outbuilding at the rear of the property.

The lithium ion battery stores energy generated during the day and releases it when required, it can also store electricity taken from the grid, topping up overnight when energy may be cheaper. When fully charged, the battery can power a home for roughly 16 hours, depending on the weather and usage.

Jonny Williams, business development director at SPECIFIC and project lead for Active Homes Neath told BIM+: “We expect the homes will generate about 80% of what they consume, based on a good estimate of all loads, including plugged-in appliances, not just regulated loads listed in Building Regulations. 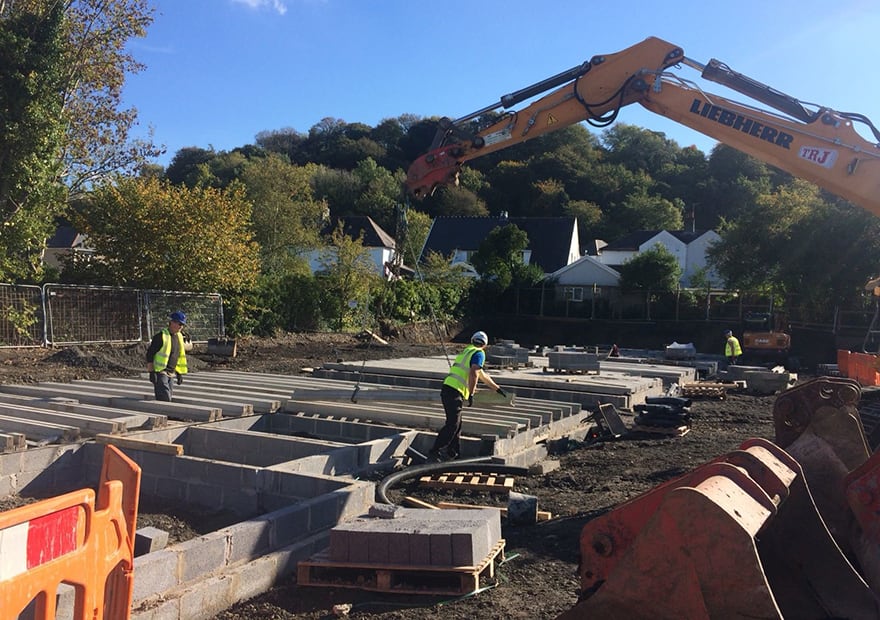 Active Homes Neath is due for completion next summer

“We have tried to be as upfront as possible about the whole process of power generation storage and use, if batteries are full it will be possible to channel power back into the grid, there is also provision for electrical vehicle charging for a ‘pool’ of one or two cars.”

A mechanical ventilation and heat recovery (MVHR) system extracts heat from warm moist air in the kitchen and bathroom and uses it to heat fresh air that enters through vents from outside. The system runs continuously using a small amount of energy from the solar PV and battery.

The south-facing wall of each home is fitted with perforated steel panels that can collect 50% of solar heat energy hitting the surface. The system works by heating the layer of air on the outside of the steel, which is drawn through the perforations into a cavity then ducted off into the building.

Heat from the solar wall helps provide hot water, via a heat pump, and alongside the MVHR for room heating, eliminates the need for a traditional gas boiler.

Pobl Group will operate and maintain the homes and worked hard to simplify the user experience. Battery charging and discharging can be controlled and monitored by residents using a smartphone app, the MVHR system can be given a boost of heat with the simple press of a button, if it’s too warm occupants can open a window.

“Pobl had workshops with its housing and asset management team and the tenants to explore any technical issues and any uncertainties and fears they might have. All info and training for tenants had to be kept simple and fit on just a side or two of A4 paper,” says Williams.

Active Homes Neath is due for completion next summer, 10 of the houses and flats will be monitored for 12 months post-occupation to gauge how systems are performing – with the aim of replicating it and scaling it up across the region and further afield.

The project is a key output from the wider Homes As Powerstations pathfinder initiative for the Swansea Bay area. The Active Buildings concept was first demonstrated by SPECIFIC in the Active Classroom, which over the past 12 months has generated more than one and a half times the energy it has consumed, and the Active Office, which opened in June.