In what is aiming to be a new landmark for Dubai, developer Ithra Dubai’s “One Za’abeel” mega mixed-use project is now under construction.

It impressed jurors at Bentley’s 2019 Year in Infrastructure Awards in Singapore last month enough to win a place as finalist in the 4D modelling category.

The size and complexity of the project led main contractor ALEC Engineering & Contracting LLC to turn away from traditional methods of scheduling – tables, graphs and charts – and embrace 4D modelling with Bentley’s Synchro.

More than two years in, 4D modelling has knocked 70 days off the programme thanks to clash detection and better scenario planning, and has saved $16m, by giving clearer visibility into the structure and the schedule. 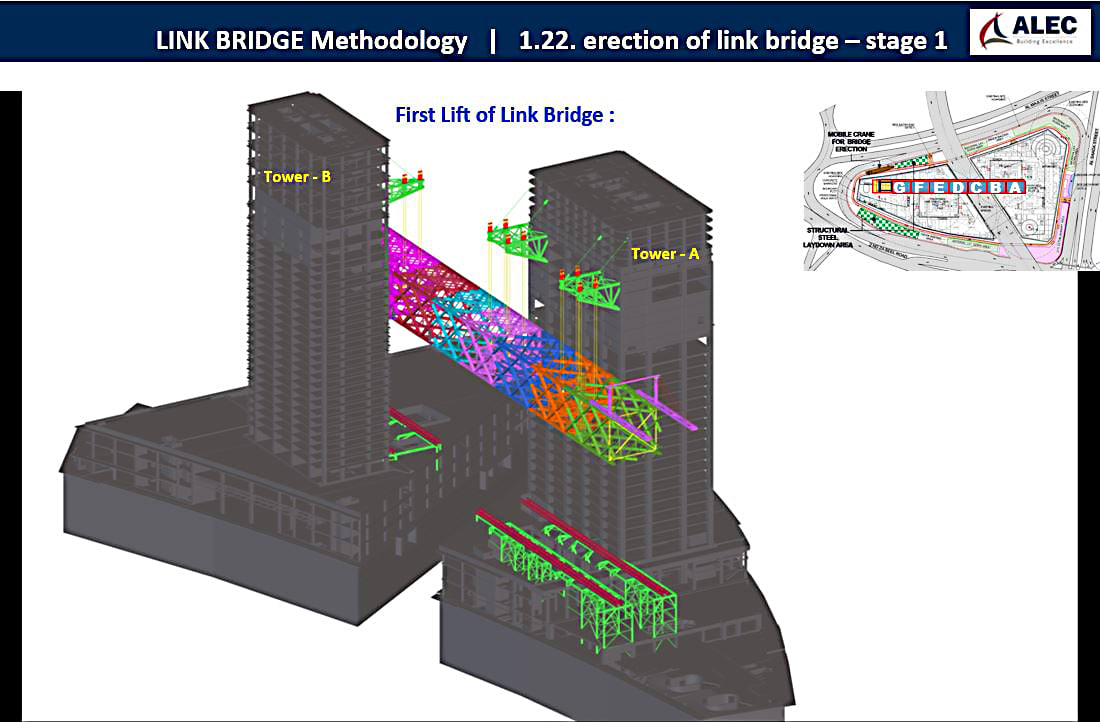 One Za’abeel comprises two tall podium-mounted towers on either side of a busy thoroughfare, next to the Dubai World Trade Center Exhibition Halls. The towers will be linked 105m up by a steel bridge, which the project team claims is “the world’s largest cantilever”. It juts 66m into thin air.

Images do not convey the scale of the structures, which have a total built-up area of 480,000 sq m.

The link itself is 227m in length, a horizontal skyscraper in its own right.

At 7,500 tonnes, its steel structure weighs more than the iron in the Eiffel Tower.

The main bridge section is being constructed at podium level while the towers are being built and, as its length grows, ALEC is sliding it in scheduled movements across the busy road.

Ms. Bayan Abdel Rahman, MSc, joined ALEC to be senior 4D planning engineer for this major project. She told GCR that the main section would be strand-jacked into place on 20 March 2020, and would be the largest lift to date in the Middle East. When fixed in place the bridge structure will be finished as an interior space with an infinity pool on its roof.

Work on the WSP-designed scheme began 18 June 2017, and is scheduled to last 1,187 days. Managing some 65 subcontracts, ALEC is responsible for architectural, civil, structural, fit out, MEP, landscaping and more.

“At the early stage of the project, we used traditional tools to build different scenarios, anticipate risks and understand the full sequence of the project,” Abdel Rahman told jurors. “However, one picture is equal to one thousand words, and once the site team started to communicate utilising 3D and 4D models, project components became more clear.”

The use of 4D modelling has already detected costly clashes and identified time and cash-saving efficiencies.

For instance, the granular visibility into sequencing identified the clash of a crane at Tower A with the plan for the steel bridge.

The planned location of openings in the structure for tower crane supports did not allow the tower crane to jump before the installation of the steel structure. The 227m-long link bridge is being built at podium level, and will slide over the road in stages, before being strand-jacked into place on 20 March 2020 (ALEC)

To mitigate this delay, the tower crane opening was shifted below level and the tower crane was planned to jump ahead to avoid the clash, which now allows the steel structure to be erected on time. Abdel Rahman said this finding avoided a delay of 40 days and $12m.

In another instance, erection of the steel link bridge was configured in six segments instead of seven, which cut one sliding operation over the road, cutting 30 days and $4m off the programme.

As a communication tool, the 4D model helped ALEC convince the Dubai authorities that the lift of the link bridge could be done safely.

Abdel Rahman said: “Integrating the upper project management areas with the fourth dimension provided insight to unforeseen risks, where taking early actions helped to increase the performance of the project and helped to increase the return on investment in short time period. Furthermore, it eliminates manual work, add quality to the information extracted, increase the efficiency of communication, reduce the time needed to prepare the reports and faster way of decision making.”

GCR editor Rod Sweet was on the jury panel for this category of the Year in Infrastructure Awards 2019.