Phase 3A is a key phase within the overall masterplan – boasting projects by leading architects Gehry Partners and Foster + Partners, it will comprise of over 550 apartments, a lifestyle hotel and a pedestrianised retail high street once complete.

With complex architecture, and a demanding programme Sir Robert McAlpine was keen to work in 4D and to develop robust sequencing and logistics for the substructure, superstructure, facade and the fit-out of the apartments.

London-based 4D consultancy Freeform developed a detailed model of the project – the most complex ever delivered by the firm – which contains some 300,000 distinct geometric elements linked to roughly 12,000 separate activities being carried out by multiple intersecting trades on the project.

The model for the substructure, superstructure and facades was primarily used as a validation tool, created after the programme was developed to check that logistical milestones could be achieved.

The model for the fit-out is more complex. Developed in tandem with the programme, it sought to interrogate the design, link it to information flowing from the trades and, as part of the tender process, create a tested animated 4D installation plan to unlock the complex project. The model focuses on the flow of trades and the sequencing of 1,200 prefabricated bathroom pods, alongside M&E, risers, screed rails in floors, doors and windows etc.

James Bowles, director of Freeform, tells BIM+: “A key programme risk on this project is the manufacture and delivery of the bathroom pods. Understanding the required works just before and just after their installation reduced this risk. By careful 4D planning the team has rehearsed their delivery, installation sequences and even each route through the site and floor plate.” 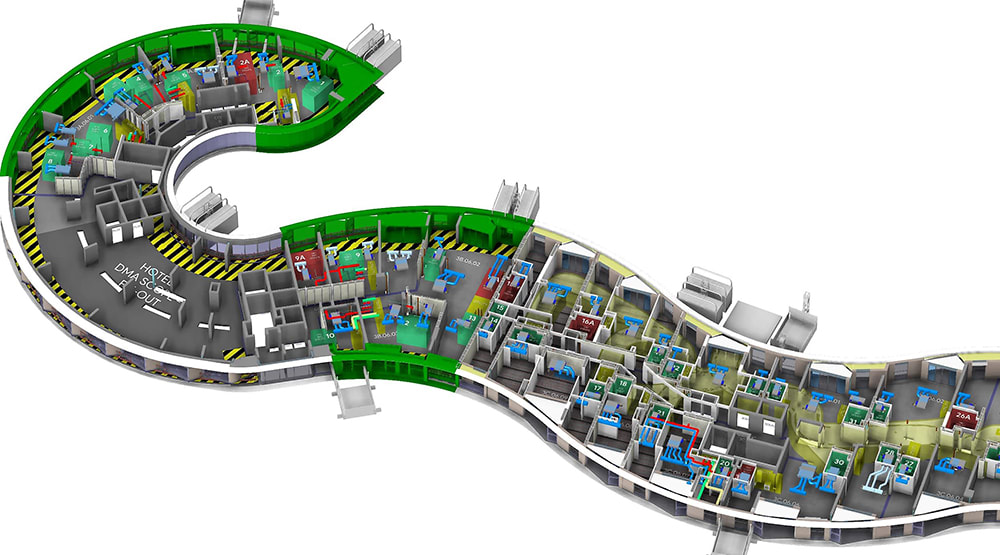 Each bathroom pod is assigned a series of installation milestones, first it is lifted into a temporary location in the apartment while various works are completed around it, then it is moved into the permanent position and the remaining works, including closing off the floor and ceiling, are completed and finally the apartment is signed off.

The lightweight 3D model was created in Rhino and linked to P6/Asta and additional time information using Synchro Pro 4D project planning software. The latter makes it possible to scrub backwards or forwards in time through planned sequences of work to check for any “clashes” and make adjustments.

At fortnightly workshops, the construction manager, project planner and all key trades interrogated the 4D model on a large 108-inch screen and two laptops. This gave them the opportunity to resolve any issues in an easy-to-understand 3D visual format.

For example, if there are 16 pods being delivered one week and the facade was coming in at the same time, it was easy to visualise that all the hoists would be busy, requiring adjustments to deliveries and timings.

Tom Hirsch, senior planner at Sir Robert McAlpine, comments: “For us the main benefit has been the ability to identify clashes and work through the issues to resolve and ensure the programme works.”

Apart from the hard benefit of improved planning, there were soft benefits too, says Bowles: “People left the workshops with a much better understanding of how the project will run. This is not the case using traditional methods, ie. 2D plans, marker pens and Gantt charts, which is a very opaque way of running a project.”

Despite the huge size of the model, recent updates to Synchro PRO enable it to run smoothly on a laptop without being broken down into smaller chunks. “We wouldn’t have been able to attempt this two years ago, it’s just too big,” says Bowles.

When fit-out works begin later this year, floor managers will carry tablets that display a 4D model of their specific floor and the various programme milestones. As they walk the project they will be able to zoom in, monitor progress, snag issues and sign off any completed items of work.

“We expect using 4D will avoid multiple clashes and the need for remedial works, for example, when a wall has been closed up but a bathroom pod still needs to be brought in, or when a fan coil unit has to be removed because there isn’t room for the pod to fit underneath,” says Bowles.

“Fit-out projects overrun and fail as a result of poor planning. BPSDC and Sir Robert McAlpine recognised that fit-out was going to be a risk here and we created probably the most complete 4D model of fit out works anywhere. We expect to see some very positive impacts,” he concludes.