The use of BIM has helped shave 20% off the construction programme so far for the £4m two-form entry primary school, the second of three new-build primary schools being built by Baxall Construction for Kent Council Council.

The council put together a range of BIM deliverables and Employer’s Information Requirements for the project, due for completion in July, developed in collaboration with its then BIM champion Terry Gough, now director of BIM4SME.

The key aims were to reduce costs, programme and carbon, to improve visualisation and stakeholder understanding, and to generate asset and facilities management information.

Malcolm Clarke, managing director at Baxall Construction, comments: “A review of the Holborough Lakes project identified key problems that had emerged on site, such as services holes that hadn’t been designed into precast concrete floors that subsequently had to be cut out.

“We costed those impacts at about £10,000, which is very high compared to the estimated £500 in extra design fees it would have cost to get the details right upfront in BIM. The £9,500 difference could have been profit, which demonstrated to us the benefits of modelling right from the word go on Knights Park.” 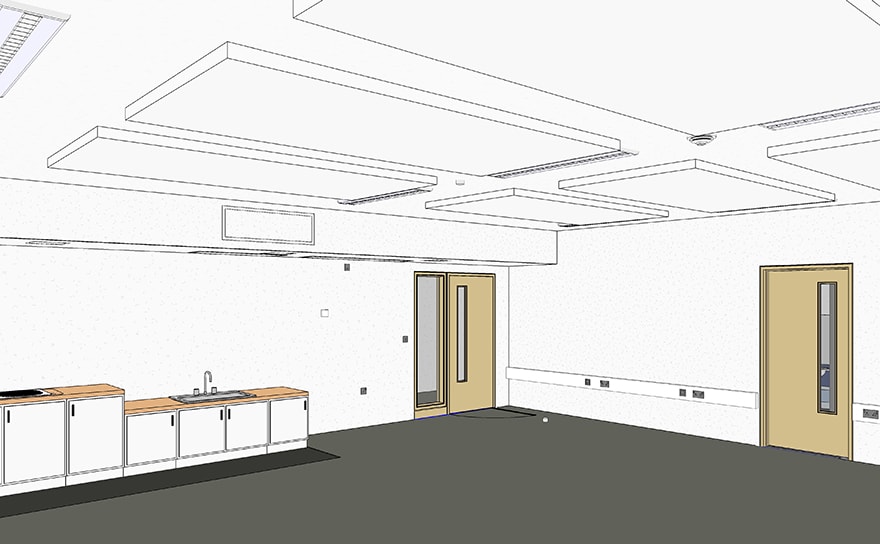 Design coordination and scheduling was improved, and a much greater level of 3D detail was included in the model.

On Holborough Lakes, BIM models were developed in Revit but were not fully federated with attribute information attached, resulting in a heavy reliance on traditional 2D drawings and only basic levels of coordination.

At Knights Park, a fully federated model was developed collaboratively in Revit, design coordination and scheduling was improved, and a much greater level of 3D detail was included in the model.

However, the team encountered problems when using a Union Square system as a common data environment (CDE), forcing Baxall to set up its own makeshift platform for access to documents.

“This didn’t include automatic approval routes or model viewing capability, so people had to rely on email a lot and using their own model viewing software,” Clarke explains. “We’re now looking at setting up a much more intuitive CDE for future projects, either using Trimble Connect, 4Projects Viewpoint, or returning to Union Square when their new product is launched later this year.”

Both M&E disciplines were displayed in Crofton Design’s model, enabling detailed coordination between M&E services as the design developed. Structural engineer Campbell Reith carried out full coordination and clash detection with architectural, M&E and subcontractor models and developed visualisations of the construction sequence and buildability.

Knights Park acted as a testing ground for Baxall’s recent £40,000 investment in Vico Office software, developed by Trimble, an integrated BIM workflow package for construction projects, which it is using to perform quantity take-offs and costing exercises.

Clarke said: “When planning Knights Park we saw the great potential of doing quantity take-offs in BIM, even as the model is developed and the level of detail increases. The software enables users to input current, historic, or industry benchmark rates, and use them to create a budget, essentially doing all the 5D stuff everyone’s talking about. Both M&E disciplines were displayed in Crofton Design’s model

“It’s really exciting, we’ve got senior estimators saying ‘my god, this is amazing!’ it would have taken us three weeks, doing manual measurements and calculations to do, what the software can do in hours.”

Although Knights Park served as a trial for Vico Office, Baxall is now implementing it more fully on the £4.9m St George’s primary school, also under construction in Kent, using it to develop work schedules and programmes and 4D simulations of the construction process.

“With accurate quantities in the model, you can start applying resources to it, producing different programme and resourcing flow charts or bar charts, then examining the impact of real changes, such as how much faster it would be to put two piling rigs on the job, instead of one,” says Clarke. “Vico’s 4D simulation of the construction process helps us visualise the whole process much better, making any changes faster and more efficiently.”

Modern methods of construction were used to manufacture the superstructure for Knights Park, a first for the council, which helped reduce risk and improve quality on the project. Combined with the use of BIM, this has helped knock eight weeks off the programme so far, and even greater savings are predicted on future projects.

Clarke explains: “MMC aligns perfectly with BIM’s focus on upfront design to ensure that things go smoothly on site. Our approximate 20% reduction in programme brings us much closer to the government’s Construction Strategy 2025 target.”

Although overall costs were not reduced at Knights Park, Clarke says that Baxall has started to tell potential subcontractors not to price jobs for risk because they will have much more accurate and complete project information when they come to site. “In general, as the supply chain starts to see the the results of what BIM produces the industry will start to see costs come down,” he concludes.

It’s really exciting, we’ve got senior estimators saying ‘my god, this is amazing!’ it would have taken us three weeks, doing manual measurements and calculations to do, what the software can do in hours.– Malcolm Clarke, managing director, Baxall Construction