Trimble’s Tekla Structural Designer has been used to design the facade retention scheme for The Knightsbridge Estate, a £150m redevelopment project in central London. The software enabled the designers to produce a coordinated analysis of complex and highly variable frame, saving time and money on site.

Designed by Fletcher Priest Architects, the 340,000 sq ft project is set to restore and invigorate the city block. When complete, the development will deliver a mix of high-end retail, contemporary office spaces and 35 luxury apartments, all arranged around a courtyard garden, as well as a rooftop restaurant, complete with panoramic views of the city.

The architectural ambition of restoring the facade to its former 20th Century glory presented a major challenge when it came to retaining the extensive building facade, while the internal structures were being demolished to make way for the new development. There was also the added difficulty of coordinating the temporary structure around the existing street level services and London Underground assets, located beneath the site.

Due to the complex nature of the project and the numerous site constraints, the Wentworth House Partnership (WHP), an engineering design consultancy, used Tekla Structural Designer to design and detail the facade retention scheme.

The 340,000 sq ft project is set to restore and invigorate the block in Knightsbridge

Using Tekla software and working in 3D has proven to be vastly more effective than 2D, making it easier to produce complex, layered framework designs, allowing for clash detection and reducing the amount of re-work required on site.

Stuart Vaughan, director of Wentworth House Partnership, said: “The Knightsbridge Estate project presented many challenges, such as the site location and sheer size of the facade. For example, the structural arrangement and pavement conditions around the perimeter of the site meant that there were at least six different framing arrangements required.

“However, considering the size and continuity of the facade, with the whole site covering an area of 3.5 acres, the retention frames couldn’t be considered in isolation and therefore it was important that the modelling software included them all in its calculations, which Tekla Structural Designer was able to do.”

Being in the centre of one of London’s busiest shopping districts and adjacent to London Underground assets, with Knightsbridge Underground station included within the planned redevelopment works, the location was an added difficulty for WHP to consider.

“Due to the height of the facade, the retention scheme had to penetrate through the pavement,” said Vaughan. “However, considering the site’s proximity to the London Underground services we were restricted in terms of workable design solutions – for example, we were unable to pile in proximity to the live London Underground assets. In addition, we also had to design the load transfer structures around the street level services, ensuring that they were considered within the model too.

“We relied on Tekla Structural Designer extensively, as it was critical that the transfer systems were designed in a way that meant the load path was viable, while at the same time avoiding the extensive live services. It enabled us to produce a detailed analysis and design of the retention structure, taking all of these factors into account.” 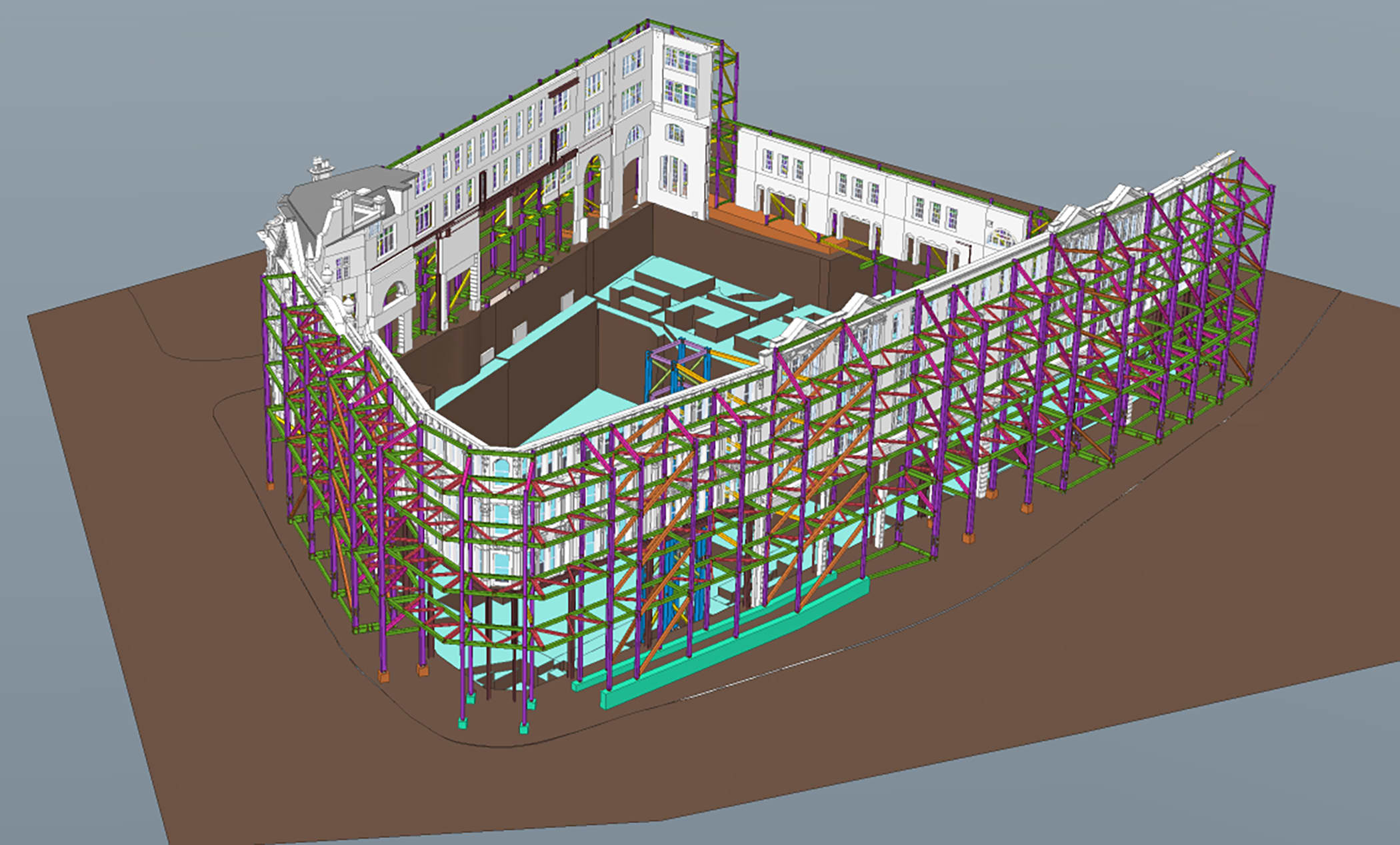 Another issue faced by structural engineers when designing a facade retention scheme of this scale is deflection, as too little stiffness could result in the excessive movement of frames, and consequently even structural damage to the facade itself – a serious concern when the building is located in a busy London shopping district and falls within a conservation area.

Vaughan said: “The design for this project was deflection critical, meaning that the deflection of horizontal trusses, vertical frames and transfer systems had to all be considered.”

One of the benefits of BIM and Tekla Software is its automatic clash detection. Rather than hand-drawn 2D models where clashes could pass undetected until construction had begun, resulting in costly rework and delays, Tekla 3D modelling can alert engineers to clashes at the design stage, helping mitigate errors and streamline the design process.

As well as considering clashes within the retention structure itself, the retention steelwork on the Knightsbridge Estate project also had to be precisely coordinated with the existing building facade.

“For facade retention, ensuring coordination between the existing and the temporary structure is absolutely imperative,” said Vaughan. “However, this can prove difficult, as many of the retention scheme connections are unique and will involve the design of non-standard elements and supports.

"It is therefore critical that they are correctly understood by the modelling software when detailing. Tekla Structural Designer was able to analyse the steel frame and load paths while also ensuring positional coordination with the existing façade, reducing the risk of clashes or need for re-work on site.”

Furthermore, WHP was able to easily update and analyse the model whenever changes were required by the client, both during and after the design process, ensuring that the overall structural system wasn’t compromised by any such changes.